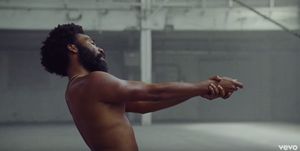 Childish Gambino, the alter ego of cultural influencer Donald Glover, has set social media on fire with his latest video for the single, "This Is America." The surprise offering was dropped last night during his appearance on SNL as host and musical guest. The video, set in a warehouse and directed by Hiro Murai, who also directs the cult favorite "Atlanta," follows a shirtless Gambino as he, literally, dances though chaos. His indictment of the violent, racially charged, oppressive space that America has become is disturbing, brilliant and poignant. Isaac Hayes III remarks that Gambino is "who we thought Kanye was."

For information on Childish Gambino and his upcoming #ThisIsAmerica tour, go to: http://childishgambino.com